Email ThisBlogThis!Share to TwitterShare to FacebookShare to Pinterest
Labels: menu 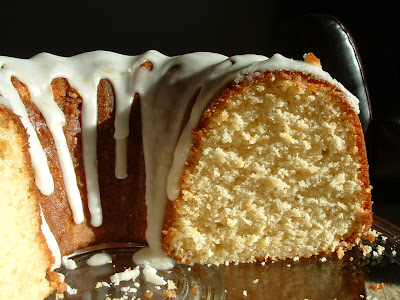 Can anyone explain to me what all the hype is about Meyer lemons? 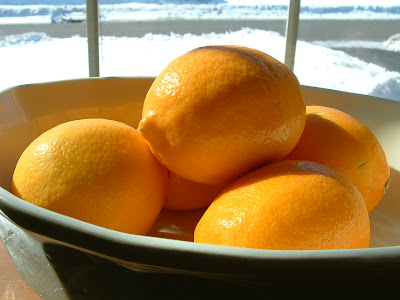 I get that they are sweeter, less pith, more tangerine-like.....but people talk about them like they are royalty. "Those aren't lemons, those are meyer lemons!" They had some recently at my grocery store, so I picked some up to see what all the fuss was about. Personally, I didn't get it. In fact, if anything, I thought baked like this in a cake they tasted less lemony. Feel free to fill me in on what I'm missing.
Meyer lemons or not, this is worth making! 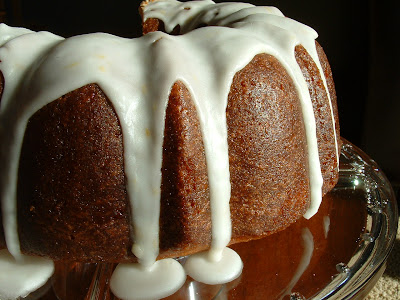 For the cake:
Cream butter and 2 cups of the sugar until light and fluffy, about 5 min.
Add eggs one at a time.
Add zest.
Sift dry ingredients in separate bowl.
Separately, combine 1/4 lemon juice, buttermilk, and vanilla.
Add the flour and buttermilk mixtures alternately, beginning and ending with flour.
Pour into greased and floured bundt pan or two loaf pans.
Bake at 350 degrees for 45 min. to an hour, until tester comes out clean.

For the syrup:
Cook 1/2 cup sugar with 1/2 c lemon juice in a small sauce pan over low heat until sugar dissolves.
When cake is done, cool for 10 min, invert and brush with lemon syrup.
Allow to cool completely.

For the glaze:
Combine powdered sugar with remaining lemon juice, whisking until smooth.
Pour over top of cake.
Posted by Heidi at 7:01 AM 2 comments:

Yeah! It's spring! I'm so ready to start grilling and pulling out some spring and summer recipes!
Here's what's on tap this week:

Email ThisBlogThis!Share to TwitterShare to FacebookShare to Pinterest
Labels: menu 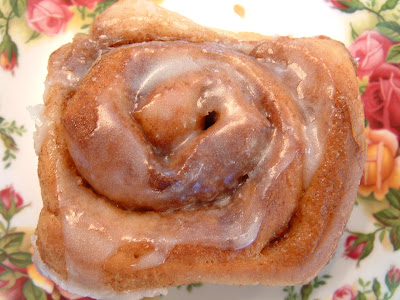 These are the best homemade cinnamon rolls you'll ever bake. Trust me. Throw out your old recipe. You can stop looking. The Pioneer Woman, Ree Drummund, has come up with an amazing recipe that isn't all bread. It is the perfect ratio of bread to cinnamon to sugar. Add it makes a ton! Go ahead and make the whole batch and throw some in the freezer. If you are making a mess anyway, you might as well enjoy it for weeks to come....if they last that long! 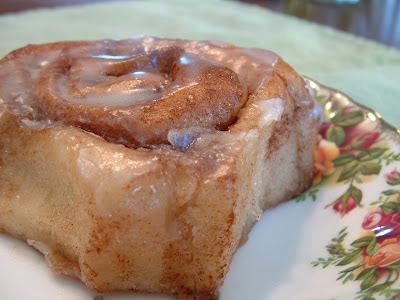 Mix the milk, vegetable oil and sugar in a pan. “Scald” the mixture (heat until just before the boiling point). Turn off heat and leave to cool 45 minutes to 1 hour. When the mixture is lukewarm to warm, but NOT hot, sprinkle in both packages of Active Dry Yeast. Let this sit for a minute. Then add 8 cups of all-purpose flour. Stir mixture together. Cover and let rise for at least an hour.

After rising for at least an hour, add 1 more cup of flour, the baking powder, baking soda and salt. Stir mixture together. (At this point, you could cover the dough and put it in the fridge until you need it – overnight or even a day or two, if necessary. Just keep your eye on it and if it starts to overflow out of the pan, just punch it down).

When ready to prepare rolls: Sprinkle rolling surface generously with flour. Take half the dough and form a rough rectangle. Then roll the dough thin, maintaining a general rectangular shape. Drizzle 1/2 to 1 cup melted butter over the dough. Now sprinkle 1 cup of sugar over the butter followed by a generous sprinkling of cinnamon.

Now, starting at the opposite end, begin rolling the dough in a neat line toward you. Keep the roll relatively tight as you go. Next, pinch the seam of the roll to seal it.

Spread 1 tablespoon of melted butter in a seven inch round foil cake or pie pan. Then begin cutting the rolls approximately ¾ to 1 inch thick and laying them in the buttered pans.

Repeat this process with the other half of the dough. Let the rolls rise for 20 to 30 minutes, then bake at 400 degrees (see note below) until light golden brown, about 15 to 18 minutes.

For the frosting, mix together all ingredients listed and stir well until smooth. It should be thick but pourable. Taste and adjust as needed. Generously drizzle over the warm rolls. Go crazy and don’t skimp on the frosting.

Email ThisBlogThis!Share to TwitterShare to FacebookShare to Pinterest
Labels: breakfast

Here's the plan for this week:

feel free to drop me a line at
housewiferybrand@gmail.com

Welcome to my blog!

Thanks for stopping by. This blog is a place for me to record all about life in my home: kid sayings, craft projects, recipes, thrifty ideas. Feel free to look around, I won't think you're being a stalker.

Heidi
I am a wife. I am a mother to 3 kids. I love to bake. I love to make things. I am grateful for the good things I've been given.